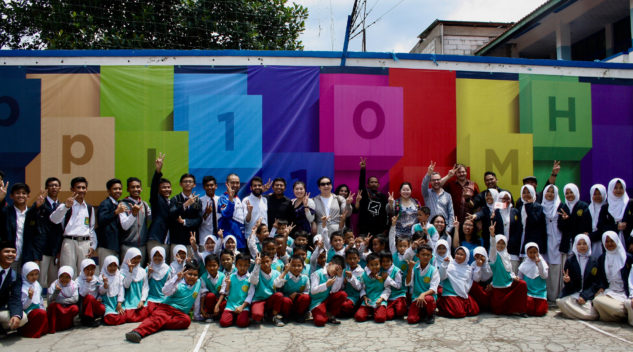 During the February 2018 Reading Week, seven students from the Contemporary Asian Studies program visited Bandung and Jakarta in Indonesia to develop a deeper understanding of Islam’s political and social expression. Led by Professor Jacques Bertrand and PhD candidate Alexandre Pelletier, this International Course Module (ICM) aimed specifically at visiting a range of Islamic boarding schools (pesantren) and Islamic organizations to understand the motivations behind their missions and the role they play in the broader Islamic community. Students learned about various aspects of the social and political activism of these pesantren and organizations. Among others, they have found that there is a vast diversity of activity and missions associated with these “pesantren”, in part due to the vast diversity and loose structure of the Islamic religion. They found that there are surprisingly tolerant, innovative and creative aspects to several of these “pesantren”, even within conservative Islamic organizations. This ICM offered an important corrective to some of the messages and images of Islam often portrayed in the media.

We thought that religion would wane as a result of modernization and economic developments. Yet religion has “returned” and is today more salient than ever. From the West to the Middle East and Asia, religious actors and institutions have become increasingly important participants in public debates, discourse and policy-making. This course looks critically at the main debates in the literature on religion and politics in developing and developed countries. This is not a course on theology or belief systems. It looks at how we theorize the role of religion in politics and how politics takes into account “religion” and religious actors. The course first looks at the definitions and explanations of broad phenomena like secularization, religious freedoms, fundamentalism, and violence. In the second half, the course looks at the ways in which states engage with religious institutions and actors, play the “religious” card and how, in return, religious actors pressure the state into adopting a religious agenda. The goal of this course is to offer the student theoretical and conceptual tools to make sense of religiously driven current events in a global context.

* I was responsible for designing and teaching the entire course.

This seminar aims at exploring various facets of how democracy contributes to intensifying or reducing ethnic conflict. Many studies have suggested that democratic institutions in their early stage fuel ethnic violence. Yet, only democratic institutions can provide the kind of institutional channels that allow conflicts to be resolved through negotiation and compromise. We discuss the debates and theoretical propositions that arise from empirical studies on these issues.

* I was responsible for teaching one section of this upper-year undergraduate and M.A. seminar.
​
Propulsé par